Principal's Blog - 'Standing on the Shoulders' 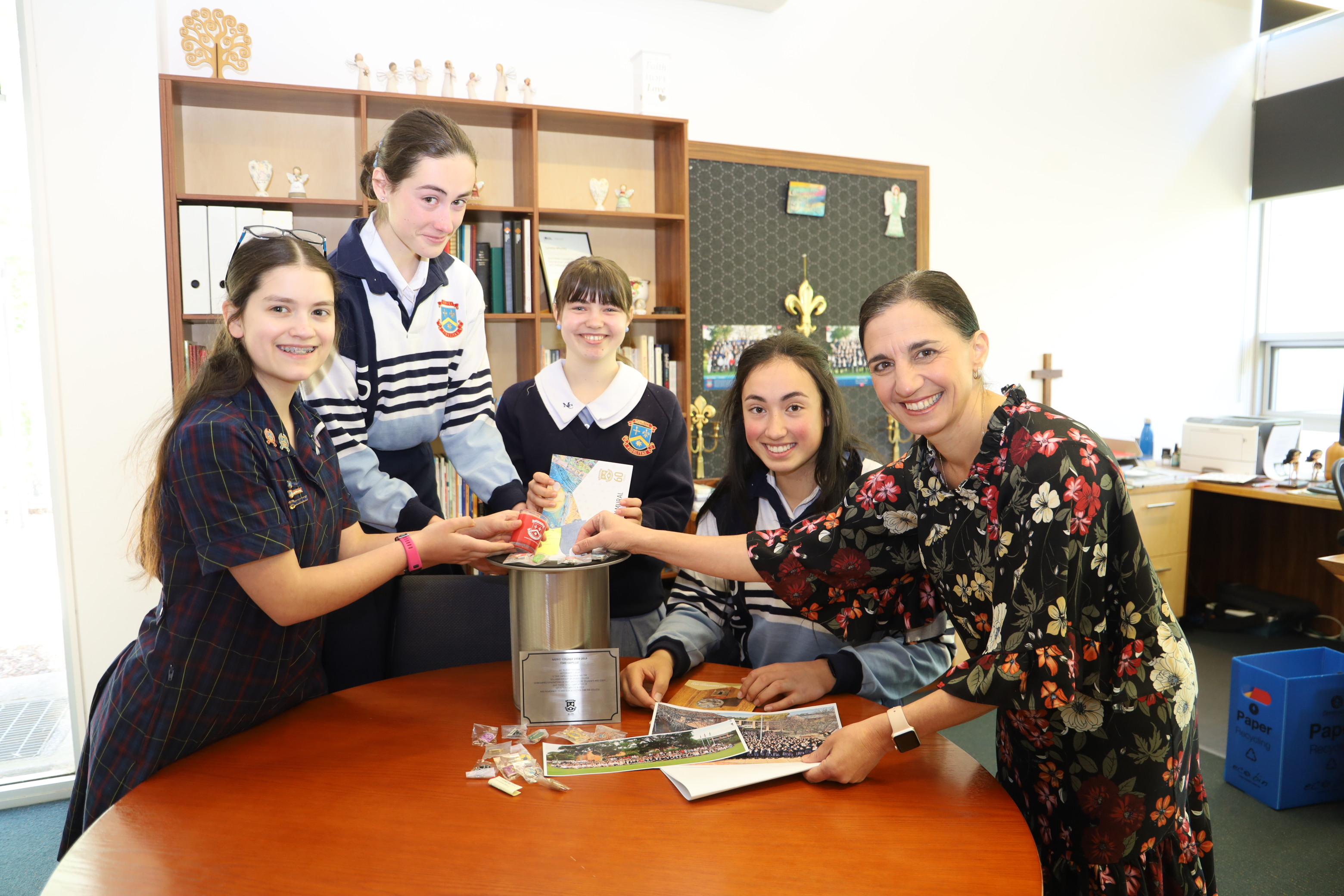 Together with representatives from our student body, we placed special items of remembrance in a time capsule. The time capsule will be buried in the next week or so and honours generations of the past, present and future students and staff.

On Sunday 22 March 1959, His Grace Archbishop O’Brien formally blessed and opened Canberra Catholic Girls’ High School. As the first Catholic secondary College for girls in Canberra, Merici was and remains unique. Moving away from the usual Australian custom of placing a school under the direction of nuns from one religious congregation, the first 15 members of the school staff were drawn from six Orders: the Good Samaritan Sisters, Brigidine Sisters, Sisters of Mercy, Sisters of St Joseph, Presentation Sisters and Ursuline Sisters. Sister Clare Slattery was the first headmistress.

In the words of Naomi Turner, formerly Mother Campion and Merici teacher 1959-1968,

“To determine a new direction in any field requires imagination which abandons traditional thinking and courage which will put consequent decisions into operation. When the leaders of six religious congregations accepted Archbishop O’Brien’s challenge to collaborate in staff the new College, they possessed both imagination and courage.”

I would like to acknowledge the commitment and dedication of our 60th Organising Committee members, Helen Beasley, Helen Campbell, Christine Collins, Amy Connellan, Adrian Heim, Kaye Hogan, Wanda Lawler, Virginia McLeod, Ros Parisi, Sr Genny Ryan, Eva Schroeder, John Volpato, Bernadette Alexander and Rosemary Sheehan (some members pictured) who have contributed greatly to the successful organization of our events this year. Our committee held its first meeting in March 2018. At that meeting we identified two main objectives that we hoped to achieve. First, that our celebrations recognize our founding orders and embrace how our Sisters have shaped our past, present and future.  Second, that all members of community have an opportunity to attend at least one event in celebration of our 60th. With this in mind, we organised several events throughout the year.

We started off with our Opening School Assembly held in February, where our 60th Prayer was released and our beautiful wooden statue of St Angela Merici was unveiled as a tribute to a courageous woman who influenced the religious society of her time and educated young women. Her legacy goes on today, she is still teaching us. She is a role model and example of how one individual, with courage and conviction, can inspire women and men to dedicate their lives in service of God and others in our community. I also presented a historical timeline and spoke about the different names the College has had. The names discussed were St Patricks, Our Lady of Lourdes, Trinity, and to stop any controversy decided to go with Canberra Catholic Girls High School (there was even disagreement over was it a High School or a College). It was actually not a popular choice and got lots of criticism from the local church papers at the time for being boring and not having any connection to a Saint. But this was difficult given that six different groups of nuns, who had a connection with a different saint or vision or charism – it was not believed that they would be able to agree and they didn’t want to put one order of nuns as being more important than another. But the names continued to change and evolve with time. When Catholic Girls High School Griffith (now St Clare’s) opened it was necessary to drop the Canberra and add Braddon, then boys came along for a few years and so they had to remove Girls and then when they left the Girls was added back in. Finally in 1983, celebrating the Jubilee Year and the first lay (non-religious principal) Merici College was named.

We also held a photography competition with the theme “What does Merici mean to you? for Alumni, current students and staff. I would like to thank our community members who entered their photo/s in our photography competition and congratulate our winners, especially our 1st Prize winner, Meg Murphy, with her image Untitled 2 - a depiction of the door handle leading into the Chapel. Not only does the image convey the past sixty years and all who have gone before, and that entering this door is often the first steps towards building a future, but it also acknowledges the religious founders of the school and a subtle reference as to why we are all here.

60th anniversary celebrations also included the unveiling of new House crests on St Angela Merici Day held on Friday 31 May. A video reflection of the past, present and future of our College Houses was presented to the community and students were excited to learn that they would be contributing to a very special part of history as new House crests were unveiled which further honour the wonderful women of our founding Orders.

It was wonderful to see so many members of our community at our Festival on Saturday 1 June, as one of the many faces who have moved through Merici’s doors over the last 60 years. It was a wonderful afternoon, with great food, music, dance and vocal performances and school tours. I was particularly happy to see so many of our prospective families coming along and sharing a story or two with members of our alumni.

Our Concert held over two nights in August took us on a walk down memory lane as we revisited each decade through performances, alumni reflections and current students highlighting life at Merici. Both nights were booked out and the crowds were amazing and very supportive of all the different acts and performances. I would like to thank our students, staff and alumni members who worked very hard to present a snapshot of Merici’s life over the last 60 years.

A very special Mass was held on Saturday 7 September where we reflected on our past, present and future. We were very honoured to welcome our Principal Celebrant for the celebration; His Grace, Archbishop Christopher Prowse, and concelebrating were Bishop Pat Power, Monsignor John Woods, Fr. Bernie Patterson, Fr. Emil Milat, Fr. Kieran Adams and Fr. Paul Nulley. As we gathered together as one community, we acknowledged our Sisters of the Orders who were instrumental as the foundation of our College, our Merici alumni, former and current College staff and students and families.

At the conclusion of Mass, we travelled together to three venues around the College with the Archbishop to bless our significant 60th Anniversary projects. Firstly with Sr. Ruth O’Dwyer, one of the original Presentation Sisters from the opening year of 1959, we blessed the newly planted rose garden dedicated to our Orders, religious and lay teachers, students and support staff over 60th years. Then to the past, with Phillip Rumble (Class of 1981) and John Volpato (Class of 1983) we blessed a plaque outside the gym acknowledging the boys who were students at the College in the 1970s and 1980s. We then moved to the Old Quad for the blessing of the 60th Anniversary mural with Janet Cooke (former student, staff member and parent). The mural depicts who we are, where we have come from and our vision for the future.

Our formal celebrations concluded that night with a dinner held at the Canberra Rex. The evening was indeed very special with Sisters representing their Founding Orders in attendance, as well as past students and staff, past Principals, past Catholic Education Office Directors, and current staff and students. The evening provided many opportunities for the guests to reconnect with old friends, celebrate the memories they hold and make some new ones.

On Friday 15 November at our 2019 Year 12 Farewell Assembly, our 60th Anniversary celebrations came to an end with our students. Together with representatives from our student body, we placed special items of remembrance in a time capsule. The time capsule will be buried in the next week or so and honours generations of the past, present and future students and staff. May those who come after us open this capsule in 2059 and remember us and our affection for the College.

For the past 20 years Merici College has had the mission statement: Love Life, Have Hope, Be Faithful and Build Futures more wondrous than you Dare to Dream. It captured the essence and spirit of the 40 previous years’ and I am sure will go on to shape the next 40 years too. I am standing on the shoulders of past Principals: five of whom were at the dinner - Julie Dempster, Anne Cummins, Frances Menz, Catherine Rey and Ann Cleary. Thank you for your foundations, for the work and dedication you gave to the College over the years - I hope that I am doing justice to your vision and being faithful to our founding Sisters. I have been privileged to part of this community now for seven years. I was entrusted to lead Merici and have done so with the guidance of the Archdiocese of Canberra Goulburn, the Catholic Education Commission and Catholic Education. Merici now, and as Canberra Catholic Girls High School, was and always will be a place of innovation - taking bold risks and forging through society with great initiative and pride. We will continue to be faithful to the Gospel values of Faith, Hope and Love and with the Spirit of our ten Religious Orders will go on to be a place where women and men - respond to the call to go out and make a difference in the world.

My sincere thanks to everyone for making this year a truly memorable one. 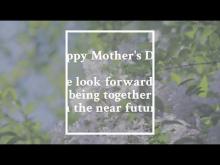 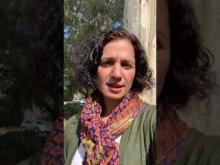